Pumping is not happening due to siltation: Water crisis in the city due to installation of bulk meter, only 4 MLD came from Gumma, used to come 20 MLD 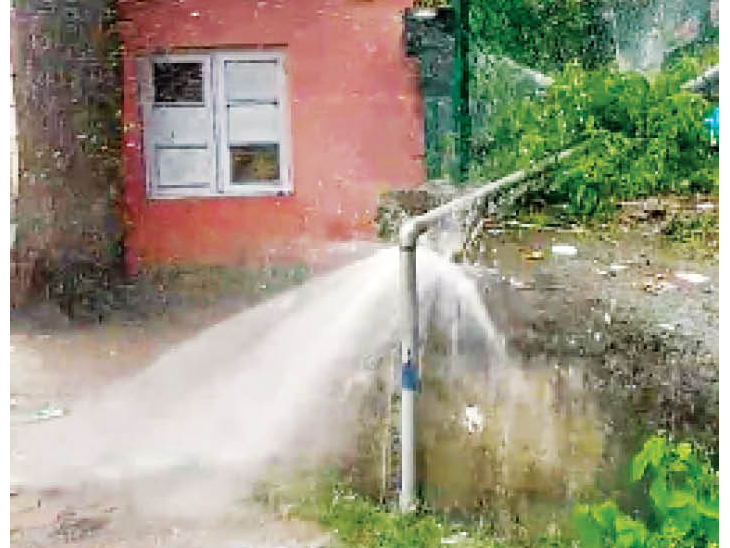 Water wasted in Summerhill when a water pipe broke.

In New Shimla also, water supply was stalled in Sector 1 to 4, Kangnadhar, Vikasnagar, Devnagar area. There is no water in many areas of Chhota Shimla zone. The drinking water company has supplied the city from the rest of the storage tanks including Craignano, from which water was given as per schedule in most areas of the core area. Shimla city could get only 32.01 MLD of water.

In which the maximum supply of 17.90 MLD has come from Giri, 4.53 from Gumma, 3.47 from Churat, 5.21 from Kati, Barandi, 0.30 from Siyag and 0.60 MLD from Chad. Earlier, the supply of water was reaching 40 to 46 MLD for about two weeks, but for the last five days only 36 to 38 MLD was reaching. Now the problem has arisen again due to siltation and installation of bulk meter in the main line.

The problem increased due to the emptying of the ridge tank, cleaning was done here: Due to the emptying of the ridge tank in the capital, the schedule of drinking water supply is getting disturbed. The cleaning work was done in this tank with a capacity of five MLD. When the tank is full, even if water does not come from the projects, even then water supply can be provided in the core area of ​​the city, but now the work of filling the tank has been started. In such a situation, water will be available from Sanjauli only for the Ridge and Chaura Maidan, when the water of the projects is reaching Sanjauli.

Pipe burst in Summerhill, wasted water: At the same time, due to the problem of leakage, in the areas where water supply was given, water was wasted. A water pipe broke in Summerhill early in the morning. Water kept getting wasted on the road. Its video also went viral on social media, but despite this the pipe was not repaired.

The problems of hoteliers may increase: Due to the cut in drinking water supply, many hoteliers of the city may have to face problems. Tourists are coming to most of the hotels of the city on weekends. Therefore, the consumption of water in them is also high. Thousands of tourists have come to Shimla for three days holidays. In such a situation, hotel business can face problems due to lack of water. Although the company gives enough water on supply, but due to the cut of two to three days, the storage of hotels also starts running out.