Question on the security of Municipal Headquarters: Two people reached the zonal officer’s office with a knife in the file, said – will kill the engineer 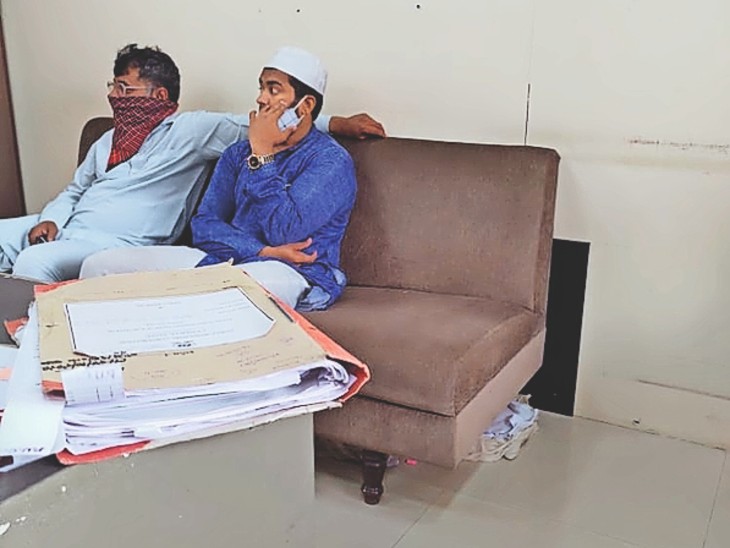 Both men sitting on the sofa in the officer’s office. Both had also got the gate pass made.

On Thursday, two people entered the office of the Central Zone’s Zonal Officer and in-charge Deputy Commissioner Gayatri Jariwala at the Municipal Headquarters with a knife inside the file. Both were called for hearing by the officer in a case of encroachment. The surprising thing is that the Municipal Corporation did not register a case against both the accused in the police.

Illegal constructions are taking place in the Central Zone. Gang wars also happen here. Zaheer Magar and Aamer Sopariwala had demanded to demolish the fourth floor of the building being built in the Rampura Chhadaol area of ​​Central Zone as illegal. Zonal officer Gayatri Jariwala had called both of them for hearing on Thursday.

Zaheer Magar and Aamer Sopariwala came to Gayatri Jariwala’s office located in room number 100 in the headquarters at 12:30 pm on Thursday. According to Gayatri Jariwala, both of them were complaining about Shakeel Abdul Rashid, who was working in the construction work in Chhadaol, Ramnagar. They were demanding immediate demolition by calling the fourth floor of the building illegal.

He took out the knife from the file and said that if the demolition action is not taken, then BR will not spare Bhatt. BR Bhatt is the Executive Engineer of Central Zone. Gayatri Jariwala was shocked seeing the knife. He immediately called the security guard. He said that after discussion with the Municipal Commissioner, the process of registering the complaint has been started. However, till the filing of this report, no complaint was lodged with the police.

There is only inquiry in the headquarters, not investigation.

The big question is how both of them reached the Deputy Commissioner’s office with the knife in the file. If something untoward happened, it would have been a major security lapse. Every day hundreds of people come to the Municipal Headquarters for their work. Everyone is asked what work have you come for? Whom to meet? After all the enquiries, a gate pass is made. However, there is no physical checking of anyone.

Situation of Central Zone: Many lobbies are involved in illegal construction, complaints keep coming every day

There is a gang war-like atmosphere in the Central Zone regarding the construction of buildings. According to the information, many lobbies are involved in illegal building construction in this zone. While one lobby is constructing the building, the other complains against it. The complaint keeps on complaining until the demolition is done.

Municipal commissioner said- Complaint has been made, police said – we did not get it

When Municipal Commissioner Banchanidhi Pani came to know that two people had reached the zonal officer’s office with a knife, he was surprised. The commissioner said that such an incident has never happened before in the municipal headquarters. A complaint has been lodged in this matter. Municipal commissioner said that a complaint has been lodged in this matter, but police inspector UA Dabhi of Lalgate police station told at 9 pm that I am sitting in the police station, but I have not received any complaint yet.

Zaheer Magar and Aamer Sopariwala have threatened to kill Executive Engineer BR Bhatt, who has been transferred from Sarthana to Central Zone. Showing a knife, both of them said that if the fourth floor is not demolished, then BR will not leave Bhatt. I was shocked to hear such threats.