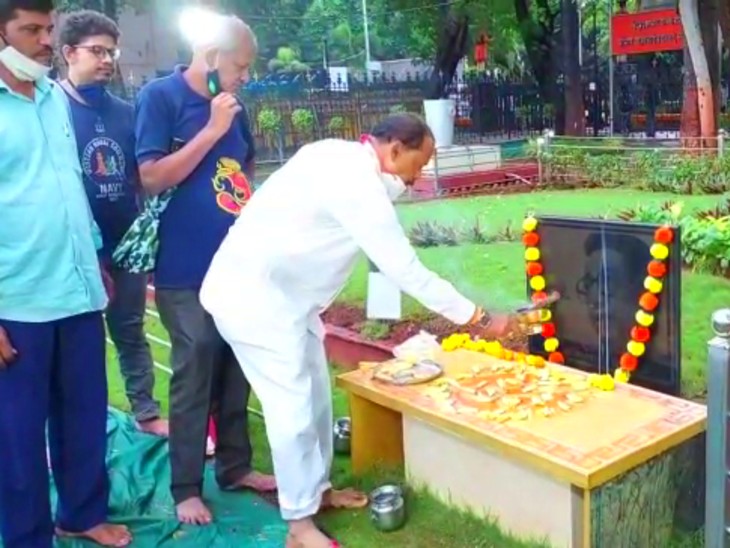 A case has been registered against 7 people for taking out Jan Ashirwad Yatra by breaking the Kovid rules in Mumbai on Thursday. Most of those who have been sued are travel organizers. It is alleged that during the journey, the people involved were seen breaking the rules of social distancing. Some were not even wearing masks. During this visit, Union Minister for Micro, Small and Medium Enterprises Narayan Rane visited Shivaji Park and offered flowers to the tomb of Balasaheb Thackeray. After Rane left from there, some Shiv Sainiks reached there and did the work of sanctifying the Balasaheb Thackeray memorial with cow urine and milk. Let us tell you that Shiv Sena MP Sanjay Raut and Vinayak Raut had opposed Rane’s visit to Balasaheb’s tomb.

On Thursday, Rane came here and bowed to the statue of Balasaheb.

A case has been registered against the organizers of Rane’s Jan Aadhirvad Yatra at Vile Parle, Kherwadi, Mahim, Shivaji Park, Dadar, Chembur and Govandi police stations in Mumbai. Rane’s Jan Ashirwad Yatra had passed through all these areas on Thursday. After Union Minister Rane’s visit, local Shiv Sena worker Appa Patil along with some of his colleagues reached near the memorial and washed it with cow urine. After that the idol of Balasaheb was anointed with milk.

Shiv Sena said – Balasaheb will never bless Rane
Shiv Sena worker Appa Patil told reporters, “Narayan Rane had come here to pay tribute to Balasaheb, but at the same time he criticized the party he has founded.” This place had become unclean because of his arrival, so we wanted to clean it.’ Shiv Sena’s local MP Vinayak Raut said that Bal Thackeray would never bless people like Rane.

Rane was earlier in Shiv Sena and has been the Chief Minister of Maharashtra. Later he left the party and joined the Congress and in 2019 he joined the BJP. After leaving the party, Rane has been continuously making rhetoric against the Thackeray family and Shiv Sena.

Such a crowd was seen during Rane’s visit, after which the police have registered a case.

Keep in mind that the statue of Chhatrapati Shivaji Maharaj is kept in every Shiv Sena program and the program begins after offering flowers to it. But from the time of the 2014 Lok Sabha elections, the BJP has cleverly acquired the symbol of Chhatrapati Shivaji Maharaj from Shiv Sena, raising the slogan “Shiv Chhatrapati ka Aashirwad, Chalo Chalein Modi ke saath”. Since Hindutva and self in Mumbai. There is a huge section of people who believe in Bal Thackeray. Therefore, Rane also visited the memorial site of Thackeray by visiting Shivaji Park. After this he also went to the nearby Veer Savarkar Memorial. Thus the BJP has tried to channelize the Hindutva vote, which is angry with the Shiv Sena, in its camp.

The motive is to capture the Mumbai Municipal Corporation
The BJP has now started creating political pressure on Chief Minister Uddhav Thackeray by forwarding the aggressive nature of Union Minister Narayan Rane. Keep in mind that earlier there was an attempt to surround the senior leaders of the parties involved in the Maha Vikas Aghadi government through CBI and ED, but due to the Corona epidemic, this strategy did not prove to be effective. Therefore, instead of separating the NCP and Congress from the Mahavikas Aghadi government, the BJP has now directly targeted the Shiv Sena. Shiv Sena gets life from the Mumbai Municipal Corporation with an annual budget of Rs.39 thousand crores. Through “Jan Ashirwad Yatra”, the BJP is taking Rane through the habitations of Marathi speaking people, especially Konkani people. Since most Konkani people are not happy with Shiv Sena going with Congress and NCP. That’s why the BJP wants to bring these angry Marathi speaking people in their court.

BJP strategists believe that if Chief Minister Uddhav Thackeray falls under the pressure of leaving the Mumbai Municipal Corporation with a budget of Rs 39,000 crore, then he may once again join the saffron brigade before the Lok Sabha elections. Let us tell you that out of 48 Lok Sabha seats in Maharashtra, 23 are occupied by BJP and 18 by Shiv Sena. In this way, about 41 seats are dominated by these two old colleagues. In any case, before the Lok Sabha elections, the BJP wants to create a political atmosphere in Maharashtra in its favor. For this, she wants to end the 32-year domination of Uddhav Thackeray by winning the Mumbai Municipal Elections to be held in 2022. If it doesn’t, she wants to build political pressure on Thackeray and take him along with her.