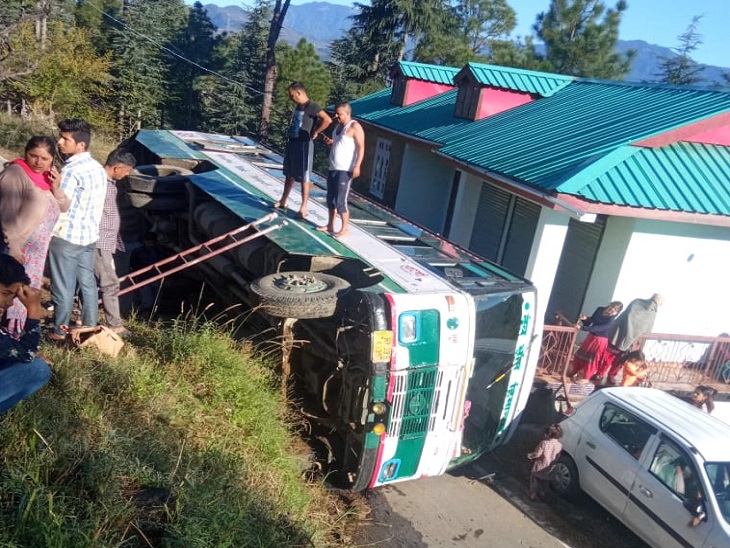 Bus overturned on the road in Karsog.

Brake of HRTC bus failed in Karsog, Himachal Pradesh (But the bus driver showed understanding and saved a major accident. There were 13 people in the bus, fortunately the bus driver boarded the bus on the link road. That the speed of the bus slowed down and it overturned on the road. Had the driver not boarded the bus on the link road, the bus could have rammed into a deep gorge later on. Two people suffered minor injuries in the accident. Those who were taken to Sunni Hospital for treatment The bus has been admitted. According to the information, the bus was going from Salana to Karsog. The driver of the bus, Murari Lal said that while going from Salana to Karsog, the bus suddenly left the brakes near Shorshan. The driver told that standing on the seat, he stopped the bus. But when the brakes of the bus did not apply, he put the bus on the link road to save the lives of the passengers. After this the bus overturned on the road. Only 2 out of 13 people got injured. All the passengers The driver told that if he had not boarded the bus on the link road, the bus would have overturned in the ditch down the road. Whatever could have happened. The police had reached the spot and restored. And the investigation of the incident is being started.

Didn’t even tell the passengers the bus broke down
The bus driver showed another understanding that he did not even inform the passengers about the incident. It did not say that the bus had left its brakes. If the passengers had come to know about this, then there would have been an atmosphere of chaos inside the bus. When the driver boarded the bus on the link road, the speed of the bus slowed down and the bus slowly started to back down. After that the bus overturned on the road. In such a situation, the lives of the occupants of the bus were saved due to the driver’s understanding.

Many lives were saved by putting the bus on the link road.

In Sirmaur also the private bus driver has saved the lives of many
Earlier in Sirmaur district also a private bus driver had saved the lives of many people like this. Here too, the driver lost his control over the bus due to a technical fault in the bus. On which he stopped the bus by standing on his seat, but the bus could not be controlled, after which he stood up and applied the brakes. Due to which he saved the bus from going into the deep gorge. There were many passengers of 30 to 35 in the bus. The bus was supported with the help of stones. After which the passengers were taken down and taken to a safe place. The driver of the bus got off the bus last. At that time the photo and video of the accident became quite viral on social media.

Special package on Karva Chauth: Tourists will get additional 10% discount; Suhagins will get puja thali and sargi

560 people returned to Patna from abroad, 475 missing: Health department could get only 85 tested amid Omicron threat, 55 report negative