Saigat to Saarashtra: 10-year-old demand fulfilled within one and a half months after Darshana became minister, Surat-Mahuva train became regular, 801 passengers traveled for free 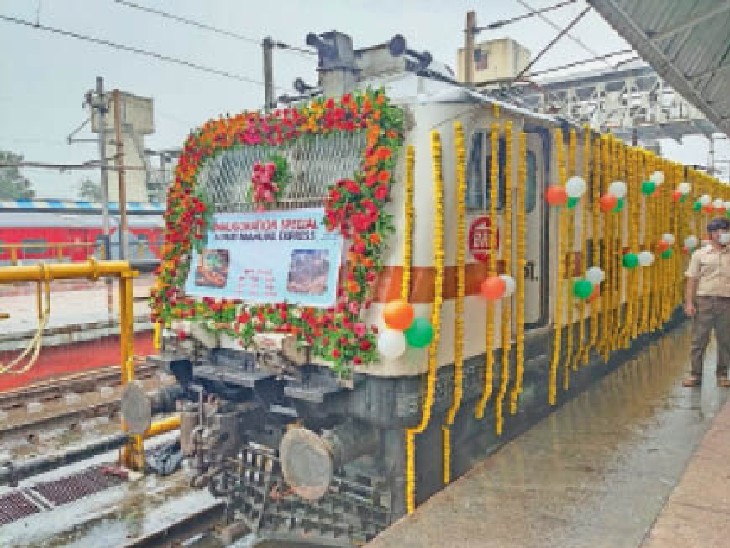 The Minister of State for Railways flagged off the train.

A decade-old demand to regularize the train running between Surat and Mahuva was fulfilled within a month and a half of MP Darshana Jardosh becoming the Minister of State for Railways. On Thursday, Darshana Jardosh flagged it from weekly to daily. Darshana has also demanded to regularize this train many times on the lines of MP. In this train, which left at 4:30 pm on the day of inauguration, 801 passengers traveled free of cost from Surat.

Surat-Mahuva train was running weekly for 12 years. During the inauguration, Minister of State for Health Kishore Kanani, MP Prabhu Vasava along with Mayor Hemali Boghawala were also present at Surat station. This train will now leave Surat at 10 pm and reach Mahuva at 9.5 am. After that it will leave Mahuva at 7.35 PM and reach Surat at 6.35 AM.

Mahuva Express will leave from Bandra for two days
As the MP of Surat, Darshana Jardosh had been demanding regularization of this train for the last one decade. Minister of State for Railways Darshana Jardosh said that earlier this train used to leave every Wednesday at 5:30 am, but now this train will leave Surat five days a week on Monday, Tuesday, Thursday, Saturday and Sunday. While it will leave from Bandra on Wednesday and Friday. Divisional Railway Manager GVL Satyakumar said that LHB rake has been given to 20955/56 Surat-Mahuva Express. This is a completely modern coach.

Timing was done at 10 pm on the demand of passengers
A total of 1020 passengers left in Surat-Mahuva train from Surat station. Of these, 801 passengers went free, while 219 took tickets. The passengers who took the tickets had made advance booking. The scheme of free travel was only on August 19. A railway official said that about 350 buses leave from Surat daily between 9 and 10 pm only for Saurashtra. Bus operators charge arbitrary fares.