Scuffle between women leaders: Congress organized a rally to surround BJP in Bhavnagar, two women leaders of the party clashed 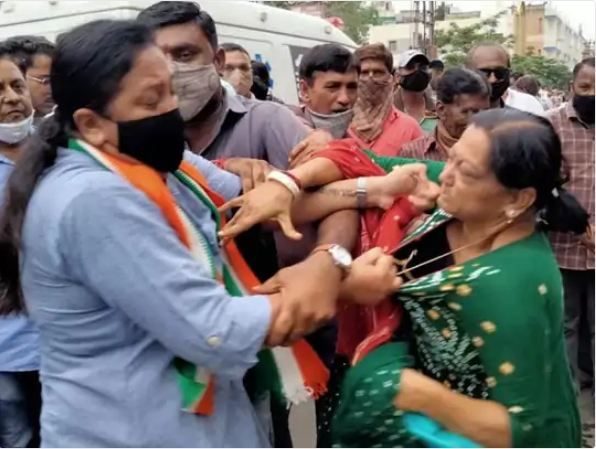 At present, there was a scuffle between city women chief Nitaben Rathod and former mayor Parulben Trivedi (in green suit).

In Bhavnagar, Gujarat, there was a fierce fight between the current and former women president of Congress on Wednesday evening. Actually, Congress had organized a rally in the city. During this, there was a tussle between the two women over some issue and the matter escalated so much that a fight started between the two.

Rally was organized for Kansara demolition
Let us tell you, the riverfront is to be built on the Kansara river of Bhavnagar city. There are 3000 houses built on the banks of this river in a radius of about 7 km, out of which 1500 houses have been given a demolition notice. Protests are going on in the city regarding this. The Congress had also organized a rally to corner the BJP on the same issue.

former mayor slapped
At present, Nitaben Rathod and former Mayor Parulben Trivedi were also present in the rally. During this, both of them clashed over something. Both of them grabbed each other’s throat and during this time Parulben slapped Nitaben and then a fight started between the two. During the scuffle, former Mayor Parul Trivedi also suffered an eye injury.

Controversy is going on regarding dominance in the party

According to the information received from the party workers, there is a long-standing dispute between the two women leaders regarding the dominance in the party. However, despite the open scuffle, the workers are angry with the party for not taking any action against the two, as social media is also getting gritty about the internal turmoil of the Congress party.