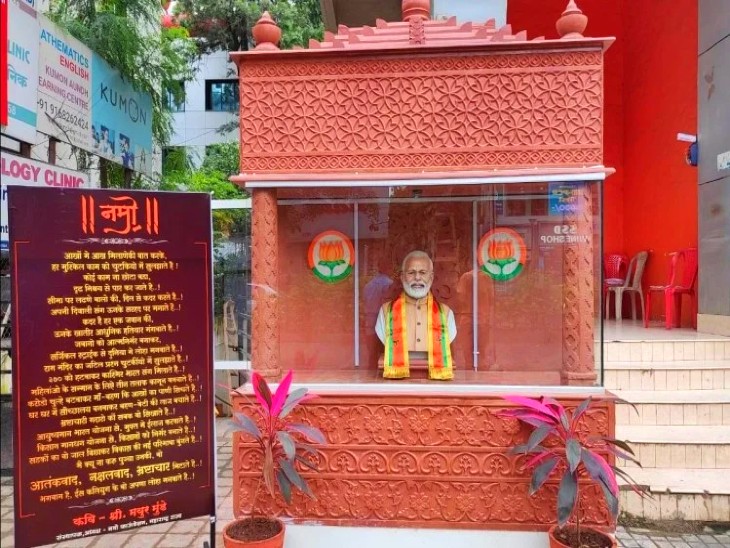 1.6 lakh rupees have been spent in the construction of this temple.

To pay respect to Prime Minister Narendra Modi, a BJP worker has built a temple for him in Pune. A statue of PM Modi has been installed inside it. This temple has been inaugurated at the hands of an elder from Aundh area of ​​Pune. Now people are gathering to see this temple.

Constructed to pay respect to the Prime Minister
A worker named Mayur Munde (37), who got it built, said that the Prime Minister ‘built a Ram temple in Ayodhya’, so he has built this temple in Modi’s honor. This temple is located in Aundh area of ​​Pune. Munde, who works as a real estate agent, said, “After becoming the Prime Minister, Modi has done many development works and has worked on issues like abrogation of Article 370 in Jammu and Kashmir, construction of Ram temple and triple talaq. “

This temple built in 1.6 lakhs
Munde said, “I felt that there should be a temple for the person who built the Ram temple in Ayodhya, so I decided to build this temple in my premises.” Munde told that the Prime Minister’s statue, red marble of Jaipur engaged in the construction and the cost of construction is 1.6 lakh rupees. A poem dedicated to Modi can also be seen in the temple, he said.

A statue of Prime Minister Modi has also been installed inside the temple.

A few days ago, BJP spokesperson Avadhoot Wagh also made a tweet praising Modi. He had said in his tweet that Narendra Modi is the 11th incarnation of Vishnu. They are like God. He is serving the country.