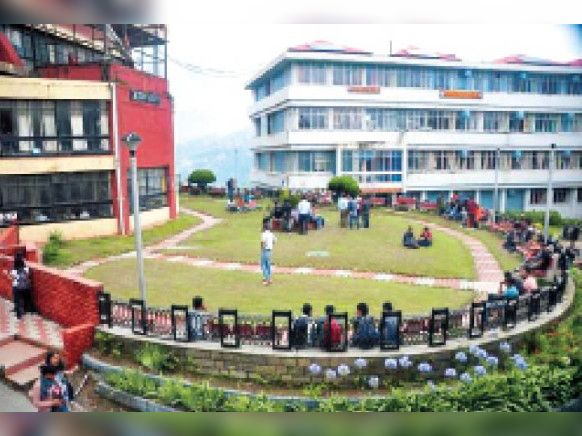 DSW will not allow Bole-Out Siders to enter the campus under any circumstances.

The controversy in Himachal Pradesh University is not taking its name to stop. After the entry ban in HPU without ID card, now the administration has taken strict action and expelled three NSUI workers from the campus. Student leaders Vinu Mehta, Yasin Bhatt and Rajat Bhardwaj have been banned from visiting the campus. These students will not be able to participate in any kind of activities on campus. They have not yet been authorized to hold classes.

In such a situation, now the dispute between the administration and the student union leaders is increasing. On July 31, there was a clash between the activists of the student organization NSUI and the police. NSUI workers were on hunger strike in the campus for the last few days demanding teacher recruitment in HPU and removal of VC.

NSUI workers reached outside the VC office and tried to enter the VC office. Meanwhile, the police tried to stop the workers, in such a situation, the scuffle started from both sides. This kind of struggle continued on the campus for a long time. For the first time after Kovid Dar, there has been such a conflict between the students and the police in the university campus. Now this action has been taken on this. Due to this action, tension has started increasing in the campus.

DSW appeals for peace to student organizations HPU’s DSW Pvt. Nain Singh has appealed to the student organizations for peace. In the circular issued by him, he said that these days PG examinations are going on in the campus. In such a situation, students coming from outside are also coming to give examinations. There will be a violent atmosphere, so new students will have to face trouble. He said that outsiders will not be allowed to enter the campus under any circumstances. Apart from this, no one will be allowed to enter without an ID card.

These girls had come under attack: Veenu Mehta, Arvind Thakur, Chandra Thakur, Tushar, Danny, Manej Chauhan and Praveen Minhas were injured during clashes between police and NSUI workers. However, the police did not arrest any student. In such a situation, as soon as the campus opens, student organizations have started becoming vocal against the university administration. SFI is also now adopting the strategy of movement in the campus. Student politics has become active again in the campus during this period of admission.

Congress and CPI(M) attacked VC: Congress party and CPI(M) took up the tension in the campus with VC Pvt. Sikandar Kumar is held responsible. Congress party has accused HPU VC of discriminating against girl students. Congress President Kuldeep Singh Rathore said that there is discrimination against the students. Due to this the atmosphere of the university is being made tense.

Criticizing the decree banning admission to the university, three student leaders of NSUI have asked for immediate reinstatement of these students. The District Committee of the Communist Party of India (Marxist) has expressed concern over the developments going on in Himachal Pradesh University since the last few days. CPI(M) district secretary Sanjay Chauhan says that the way the VC of the university, Prof. Sikandar Kumar and the entire administration are working under the pressure of the RSS.