The biggest allegation on Parambir ever: Retired ACP Pathan said – Parambir hid the phone of Kasab, the culprit of the Mumbai attack 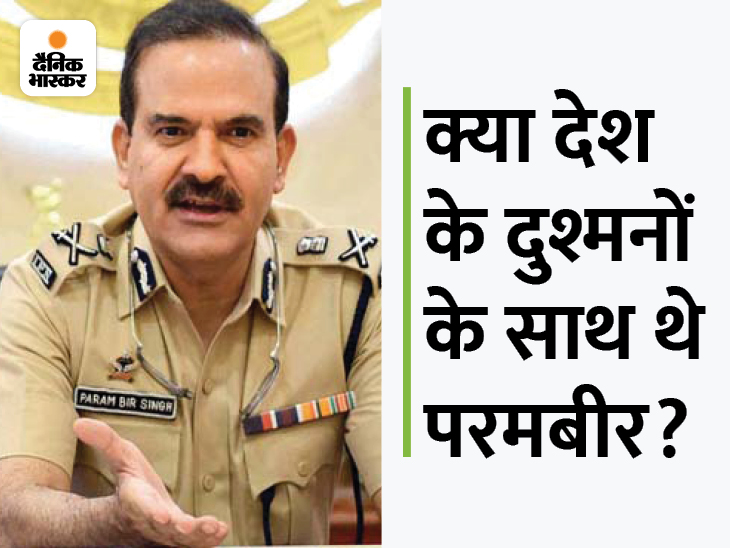 Retired ACP of Maharashtra Police Shamsher Khan Pathan has made very serious allegations against former Mumbai Police Commissioner Paramvir Singh. Pathan has accused Paramvir of helping the biggest criminal of 26/11, Ajmal Amir Kasab. They say that Parambir had kept the phone found from Kasab with him and never handed it over to the investigating officers. It was the same phone from which Kasab was getting instructions from Pakistan.

Not only this, he has also made serious allegations against Paramveer of helping some other terrorists who came with Kasab and their handlers and destroying the evidence. Pathan has sent a four-page complaint to the current police commissioner of Mumbai.

Declared the whole matter in the letter written to the police commissioner
In the complaint letter written to the Mumbai Police Commissioner, Shamsher Khan has mentioned the whole matter in detail. He said that between 2007 and 2011, he was posted as Senior Police Inspector at Paidhuni Police Station. His batchmate NR Mali was working as Senior Inspector at DB Marg Police Station. The jurisdiction of both comes in Mumbai Zone-2.

Mobile phone was recovered from Kasab
Pathan further told that on the day of 26/11 Ajmal Amir Kasab was caught in Girgaum Chowpatty area. When I came to know about this, I spoke to my colleague NR Mali on the phone. During the conversation, the gardener told me that a mobile phone was also recovered from Ajmal Kasab. At the same time, he told me that many big officers have come here, including the then Chief of ATS Paramveer Singh. According to the gardener, this phone was with Constable Kamble and was taken away by ATS Chief Paramvir Singh and kept with him.

The mobile phone was the most important evidence of this case. It was from this phone that Kasab was getting instructions from Pakistan. This phone call could have exposed the links of his handlers in Pakistan and India. So a few days after this incident, I spoke to the gardener again and tried to work out some more details in this matter.

In the 2008 Mumbai attacks, Kasab along with Ismail Khan of Lashkar-Taiba killed around 70 people.

Had mobile phones been given, many lives would have been saved.
Mali told that the investigation of this case was being done by Police Inspector Mahalaya of Mumbai Crime Branch and this mobile phone was not handed over to him on behalf of Parambir Singh. After this, both of us raised the point by expressing surprise that this was a great proof and if it is not handed over, it will help the enemies of the country. We suspected that the mobile phone would have the number of the terrorists’ handlers in Pakistan and India. Perhaps the contact numbers of some influential people of India involved in this terror conspiracy could also have been in their phones. Had the phone been given to the Mumbai Crime Branch at that time, we might have been in a position to gather more important information. Because even after 26th the terrorists were continuing their attack.

The matter of recovery of the phone never came to the fore
Pathan further told that a few days after the terrorist attack I again spoke to Senior Police Inspector Mali and he told me that he had met Mumbai South Zone Commissioner Venkatesham to get that call from Parambir and sent it to the concerned investigating officer. was asked to give it for examination. Pathana further said that I was not a part of this case, so I did not take much follow-up in this case. However, it is known to all that the information about the recovery of any phone from Kasab did not come before any court or investigative agency.

When asked to submit the evidence, Parambir was furious.
Pathan further told that now I have retired and am doing social service work nowadays. Mali has also now retired from the post of Assistant Police Commissioner. When I again asked the gardener about this a few days ago, he told me that he had gone to the then ATS Chief Parambir Singh to talk about this evidence. He also asked Parambir to hand over this evidence to the crime branch, but Parambir got angry on him. He scolded Mali, saying that he was a senior, and threw the gardener out of his office. During that time Parambir had said that you (gardener) have nothing to do with this matter.

Kasab was the only terrorist who was caught alive by the police. On 3 May 2010, Kasab was found guilty of 80 offences. He was hanged on 21 November 2012 in Yerwada Jail, Pune.

Parambir was involved with the enemies of the country
Pathana has further written that the gardener was very surprised by this and left without saying anything. Mali was also surprised that despite the information being given to Commissioner Venkatation about this incident, he had not taken any action on it. However, Mali continued his personal investigation into the whole matter and when he checked the official records, it was written that no phone was recovered from Kasab’s possession. On this the question arises that how a terrorist could have carried out such a big incident without a mobile phone. This meant that the mobile phone was found and not handed over to Police Inspector Mahale, Crime Branch. This proves that Paramvir Singh destroyed the evidence and he was involved with the enemies of the country in this entire criminal conspiracy.

In the end, Pathana has demanded from the Mumbai Police Commissioner that being a retired ACP, I can no longer remain silent in this matter and wants that the matter should be investigated by registering a formal complaint against Paramvir.