These pictures are near Mumbai: The road did not reach this village even after 75 years of independence, the family reached the hospital by taking the pregnant woman 5 km in a wooden doli 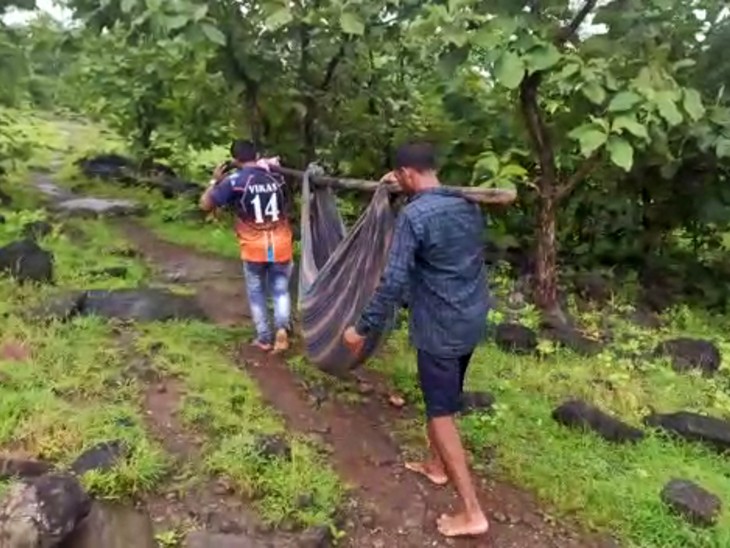 The 21-year-old pregnant woman was taken to the hospital via the hills by the people of Ambrabhui village in Wada taluka.

Political parties occupying the power of the country and the state have always been claiming smooth roads and transportation facilities. Despite this, many pictures keep popping up, which remind us of the medieval era, the era when we did not have enough roads. One such picture has emerged from Palghar district, adjacent to the country’s financial capital Mumbai. No road has been built in Ambrabhui village here since independence, due to which a pregnant woman was tied in a cloth with the help of wood and walked for 5 km and taken to the hospital.

The incident is of Wednesday, but after its pictures and videos surfaced, the matter has come into the limelight on Monday. 21-year-old Aarti Vishal Tabale, a resident of Ambrabhui village, was 7 months pregnant. On Wednesday evening, suddenly she started labor pain. Ambrabhui village in Vada taluka is situated on a hill and here the elderly are brought down in this way after their health deteriorates. Seeing the woman’s pain, some youths of the village decided not to delay. He prepared a doli-like ride with the help of wood and cloth and left the woman for the hospital after lying in it.

A 7-month-old baby was growing in the woman’s stomach, although according to doctors, she is not ready to give birth to the child.

The youth of the village helped the woman
Aarti’s elder brother Vikas Leelaka said, ‘Aarti had started labor pain on 18th August. I was in Vasai for a work, during this time I got a call. After this, I left work and somehow reached the village and made a doli with the help of a bamboo and made Aarti sit in it. After walking for about 5 kms, we got a car from the main road and after taking Aarti in it, we took us to the hospital. The youth of the village have helped us a lot in this difficult journey.”

The villagers walked for many kilometers without slippers or shoes.

The woman returned from the hospital in the doli
Vikas further told that during this time he had to go through the inaccessible path of the hill. They reached Nimbawali Health Center after about three hours with Aarti and there the doctors examined and told that the condition of the woman is stable and the time has not come to give birth to the child. After this, we brought Aarti back to the village by sitting in a doli by the same route. Vikas said, ‘Sister has returned home, but I am afraid that I do not know whether I will be able to reach her at the right time or not.

The woman was similarly brought back from the hospital to her village.

Demanded to build a road from CM to village
Lallika further said, ‘I am surprised that such conditions are still there in this area adjacent to Mumbai. I urge the Chief Minister of the state to come forward to help my sister and do something to facilitate transportation to this village. Vikas further said, ‘It is a tribal area and many pedestrians have lost their lives due to snake bites. We had earlier also demanded to build a road to this village, but every time only got assurance.