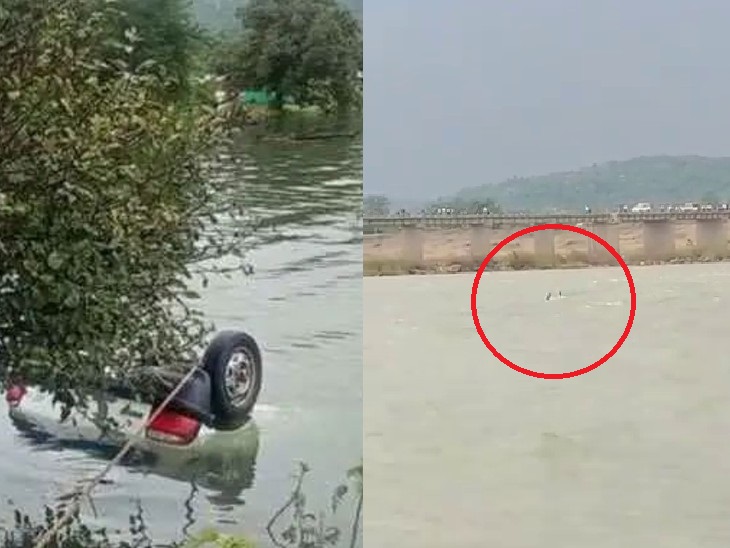 Car (left) drowned in Panshet Dam in Pune and brothers (right) trying to escape while submerged in water in Nagpur.

In Maharashtra, three people have died due to drowning in two separate accidents during the last 24 hours. The first incident took place in Nagpur, where two brothers drowned in the Goskhurd dam, which was filled with rain water, while trying to take a selfie. At the same time, the second incident has happened in Panshet Dam of Pune. Suddenly the tire of an SUV going at high speed on the road burst and three people in it were washed away with the car in the water. However, after a few hours of effort, the father and son were saved, but the mother died due to drowning. Both the incidents took place on the evening of August 15.

Mangesh Junghare and his brother Vinod Junghare died in an accident in Nagpur.

Two brothers fell in water due to selfie
On Sunday evening, Mangesh Junghare, a resident of Nagpur’s Umred, had come to Goskhurd Dam for a walk with his brother Vinod Jundhare. Mangesh was taking a selfie while standing on a wet mud mound when his foot slipped and he fell into the dam. After this Vinod also jumped into the water to save Mangesh. Unfortunately both the brothers died. The bodies of both were recovered from different parts of the dam. Mangesh, 34, has a 4-year-old son, while Vinod Janughare has a 1-year-old daughter. A video of this incident has also surfaced, in which both the brothers can be seen drowning in the water.

Car submerged in dam due to tire burst
In the second incident Yogesh Deshpande (35), a resident of Pune, was passing near Panshet Dam with son Chirag and wife Samridhi Yogesh Deshpande (33). The car was speeding and suddenly the tire of his car burst. After this, the entire car left the road and went straight into the water of the dam. After this Yogesh managed to save his son Chirag, but his wife Samridhi died due to being in the water for a long time. Samridhi’s body was recovered by a team of local divers on Monday morning. According to the police, Samriddhi could not get out after Yogesh left due to the lock of the car door.

Yogesh Deshpande’s car fell directly into the water of the dam after a tire burst.

The bodies of the three have been taken over by Nagpur and Pune police and sent for post-mortem. Since this incident, both the houses have been mourned.