Union Minister Anurag Thakur said: Himachal is leading in the leadership of the country, along with the cabinet, the national president of BJP is also from here. 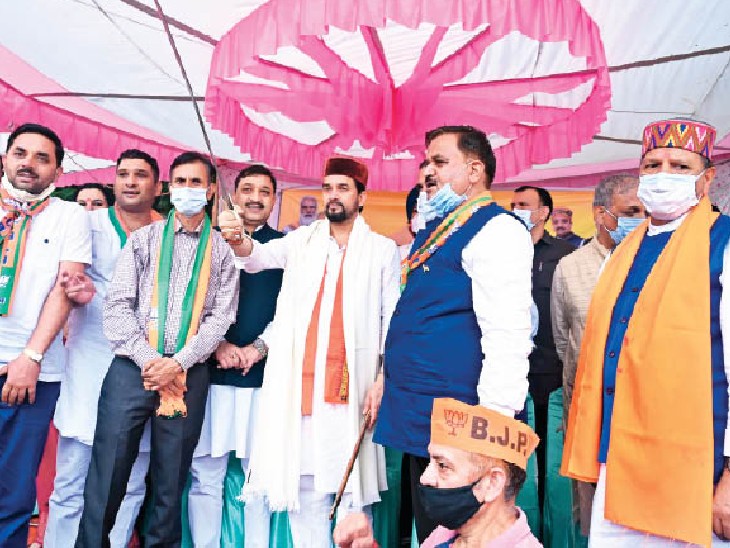 Union Sports Minister Anurag Thakur said that at present Himachal is in a leading role in the leadership of the country. Prime Minister Narendra Modi made the state proud by giving me a place in the cabinet and BJP national president Jagat Prakash Nadda is also from Himachal. He said that during the Congress rule, inflation was at its peak, at that time the inflation rate was 12 per cent, which is five per cent today. During the Jan Ashirwad Yatra organized by the BJP, Anurag Thakur was welcomed with flowers and drums and drums at many places from Parwanoo to Shoghi.

In the meeting held in Solan, the Union Minister said that the Congress had earlier written a letter asking for discussion on the issues of farmers, but when it came to discussion in Parliament, it was cut short. He said that sports will be promoted in the state and players who have gone from here to outside states will be brought back by giving facilities.

He said that while expressing gratitude to Prime Minister Narendra Modi, he said that he has given me a chance in the cabinet at such a young age from such a small state. He said that the Prime Minister wanted that the cabinet should be introduced in the Lok Sabha, but the Congress did not allow this to happen, every section has been taken care of in this cabinet. The cabinet of the Center is the youngest cabinet till date.

Party of BJP workers: Urban Development Minister Suresh Bhardwaj, District President Ravi Mehta and hundreds of workers welcomed the BJP’s Jan Ashirwad rally in Shoghi, Shimla Rural, Anurag Thakur and State President Suresh Kashyap. On this occasion, Union Minister Anurag Thakur said that Bharatiya Janata Party is a party of workers and every one of its workers is the strong axis of the party.
Today the respect and blessings received by all the party workers during this Jan Ashirwad Yatra is overwhelming and emotional. Prime Minister Narendra Modi has honored the entire Himachal Pradesh in the world’s largest democracy by making me a minister in the cabinet at such a young age. It is a matter of pride for all of us. The purpose of this 5-day Jan Aashirwad Yatra is to take the policies of the Modi government to the people, to expose the negativity of the opposition and to get the blessings of the people.