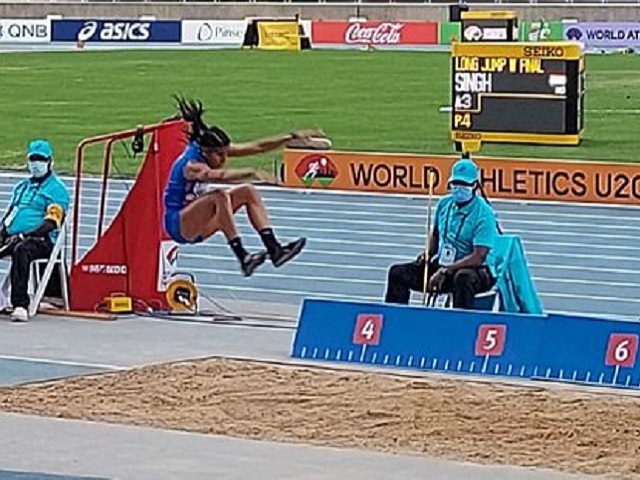 India’s Shaili Singh won the silver medal in the women’s long jump event at the World Athletics U20 Championships in Nairobi on August 22, 2021.

Shaili Singh jumped a distance of 6.59m in her third attempt, which was her best show at the event. She won the silver medal, narrowly missing the gold. Sweden’s Maja Askag won the gold with a jump of 6.60m, while Ukraine’s Mariia Horielova settled for bronze with a jump of 6.50m.

This is India’s third medal at the World Athletics U20 Championships, after a bronze in the 4x400m mixed relay and Amit Khatri’s silver in 10,000m racewalking event.

•Shaili Singh had registered an identical jump of 6.34m in the first two attempts in the finals. She had gone first.

•In her third jump, she made a major improvement with a massive jump of 6.59m.

•Though wind assistance of +2.2m/s was registered along with that attempt but it took her to the top of the standings, going into the final three attempts.

•Shaili’s 4th and 5th attempt was an X. In her last attempt as well, the Indian couldn’t better her 3rd attempt.

•Triple jump champion Maja Askag from Sweden registered her personal best in the 4th attempt and took the lead with a jump of 6.60m. She won the gold by a mere difference of 1 cm.

•She had topped the women’s long jump qualifications by recording jumps of 6.34m and 5.98m respectively in the first and second attempts. The automatic qualification mark was 6.35m.

Shaili Singh has won the Silver🥈 !
World Athletics U20 Championships,Nairobi

A personal best, she registered a jump of 6.59m in the long jump event final.

Former Sports Minister Kiren Rijiju also tweeted saying, “I still remember Anju Bobby George told me that Shaili is a future star of India! I compliment @anjubobbygeorg1 and Robert Bobby who identified Shaili at very young age and started training her professionally with the support of SAI.”

I still remember Anju Bobby George told me that Shaili is a future star of India!
I compliment @anjubobbygeorg1 and Robert Bobby who identified Shaili at very young age and started training her professionally with the support of SAI. https://t.co/IbBst9E4c3 pic.twitter.com/a3Ed9rn3JZ

Anju Bobby George also tweeted saying, “In 2017, Bobby and I came across a young girl from Jhansi. We scouted her later that year in the junior national competition and decided to induct her into the Anju Bobby Sports Foundation in 2018. Coach Bobby George has since then worked tirelessly to create a new star in athletics. From jumping 4.55m, creating national records to becoming world no. 1 (U18), with a jump of 6.48m, this little girl has come a long way.”

#ShailiSingh, you make us all very proud as you add another feather to your cap at the #WorldAthleticsU20Championships by winning a silver medal.