Corona blast in Punjab before election rallies: 32000 cases in a week; 66 killed; Active cases increased by 22 thousand; Commission will not remove the ban 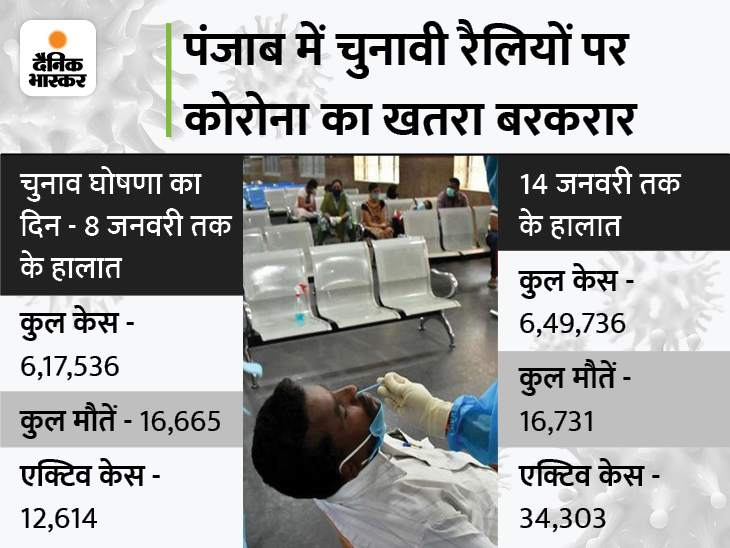 Corona blast happened even before the election rallies in Punjab. After the announcement of elections on January 8, 32 thousand 200 cases of corona were found in the state in a week i.e. 7 days. 66 corona patients died. Active cases increased by 22 thousand. Enrollment in Punjab is to start from January 21. Voting is to be held on February 14.

Patiala at number four, after Mohali, Corona uncontrollable in Jalandhar-Ludhiana

The extent to which the danger of corona has increased in Punjab can be gauged from the rapidly increasing number of patients in the districts every day. Patiala was at the fore in Punjab till now, but despite getting 634 cases, this district is at number four. Now Ludhiana has come at number one with 1808 cases. The positivity rate here was also 43.17%. Mohali with 1,215 cases is on the second number and Jalandhar with 695 cases on the third.

Officers unable to handle the situation; Rapid increase in the number of deaths and serious patients

In Punjab, the preparations of the government in terms of corona have been blown away. On Friday, 21 patients died in 24 hours. The maximum number of 7 patients died in Ludhiana. Apart from this, 4 patients died in Jalandhar, 2 each in Hoshiarpur and Patiala and one patient each in Amritsar, Barnala, Gurdaspur, Moga, Sangrur and Tarn Taran. The most alarming thing is that 637 patients have reached life saving support in Punjab. Of these, 485 are on oxygen, 122 on ICU and 30 on ventilators.

District wise status of havoc of Corona in Punjab on 14th January.