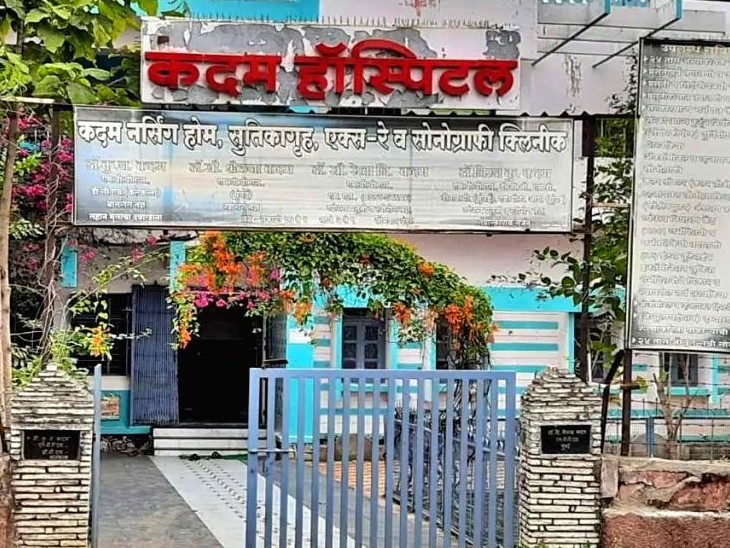 API Sonune said, this matter is very serious. We suspect that there may be many more involved in this case.

Police have busted a private abortion center in Arvi area of ​​Wardha district of Maharashtra and unearthed a graveyard of illegally aborted fetuses. 11 skulls and 54 fetal bones have been recovered from an old biogas plant on the campus of a private hospital. The police raided the hospital on Thursday and arrested its director and another employee.

After investigating the matter, Sub-Inspector Jyotsna Giri said that we have arrested the director of the hospital Rekha Kadam and one of his associates, 38-year-old nurse Sangeet Kale. The matter came to light during an investigation into the illegal abortion of a 13-year-old girl who became pregnant after an alleged affair with a 17-year-old boy who lived nearby. Both the accused had also taken 30 thousand rupees from the victim.

Sub-Inspector Jyotsna Giri said that during the raid, many stained clothes, bags, some shovels used for digging and other medical evidences were also recovered from the hospital campus, which have been collected and sent for forensic examination. . A local doctor said that while everyone was secretly aware of allegedly obscure activities such as illegal abortion, restricted sex-determination tests and even female feticide, no one dared to complain about it or speak openly about it. Didn’t dare

On Thursday, the police raided the campus of this hospital.

Police started investigation after anonymous information
Assistant Police Inspector Vandana Sonune of the team of women investigative officers said that Arvi police had received an anonymous information in this case on January 4. This team, based on information from their local sources, scrutinized and finally traced the minor girl to her parents who were threatened by the boy’s family to keep quiet.

The victim became a government witness and the case was revealed
Assistant Police Inspector Sonune said that we talked to him and gave full assurance that he will be given full security. They finally agreed to file a First Information Report in the matter on January 9, five days after the illegal abortion of the girl. Based on this complaint, a police team raided Kadam Hospital.

The police have also nabbed the boy’s parents, who had forced the minor girl to abort. He had also threatened to kill the girl if the matter came out. When these four accused were interrogated by the police on remand for two days this week, they gave information about this graveyard. After this raid was done on the biogas plant.

The police suspect that this racket has been going on for many years.

Now more people can join this case
API Sonune said, this matter is very serious. We suspect that there may be many more involved in this case. Renowned gynecologist Dr Ganesh Rakh from Pune, who spearheaded the ‘Beti Bachao’ campaign here in 2012, strongly condemned the incident and said it should be thoroughly probed as it was a move by the female feticide racket being run in the hospital. Maybe.

Shiv Sena leader told to complain to Home Minister
Shiv Sena leader Kishor Tiwari said that the Maha Vikas Aghadi government should take strong cognizance of this. I request Home Minister Dilip Walse-Patil and Director General of Police Sanjay Pandey to constitute a special investigation team and get to the root of these suspicious activities.