International Kullu Dussehra will start tomorrow: Dussehra committee has sent invitations to 332 deities, there will be no activity in the vacant place, the deities will have to sit at the marked places

Oct 14, 2021 deities will have to sit at the marked places, Dussehra committee sent invitations to 332 deities, here will be no activity in the vacant place 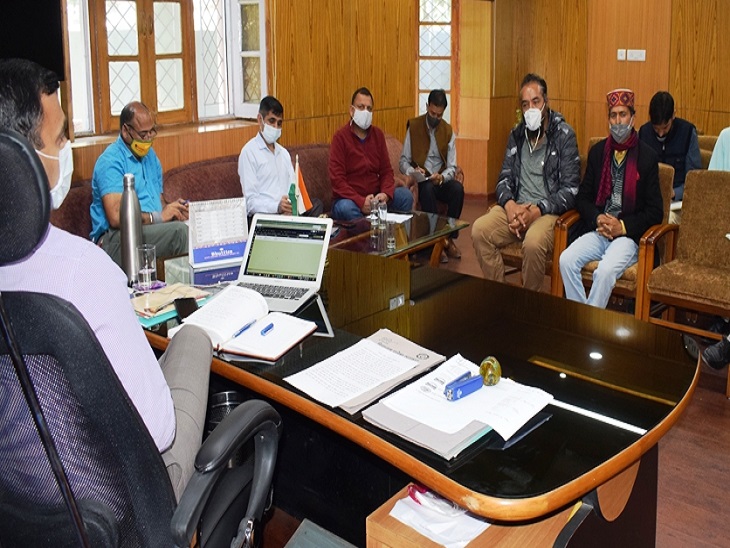 International Kullu Dussehra festival will start from October 15, 332 deities were invited by the Dussehra committee to participate in this Mahakumbh. The last meeting regarding the organization of the festival was held in Kullu. District Collector Ashutosh Garg said that the international Dussehra festival will start from October 15 and this time only the Mahamilan of deities will be visible in the festival. For the last several years, places have been marked in the Dhalpur ground for the deities of the district to sit and a map has also been made for it. The Deputy Commissioner clarified that the deities would sit in the Dhalpur ground only at their designated places so that any dispute could be avoided. Officers of various departments including Superintendent of Police Gurdev Sharma were present in the meeting.

There will be no activity in the vacant place

Ashutosh Garg said that the place where commercial activities or exhibitions used to take place in Dhalpur ground would be kept completely empty and no encroachment would be allowed in it. In Dhalpur, no activity will be allowed in the vacant place. A committee was also constituted under the chairmanship of SDM to mark such places and to do barricading. In which the clerks were also included. A large number of police forces will be deployed at Dhalpur ground to ensure compliance of COVID rules and other law and order situation.

Other deities should not accompany Lord Raghunath’s journey.

It is necessary for everyone to wear a mask

The Deputy Commissioner said that all the people associated with Dev Samaj will have to use masks in Dhalpur ground. Devotees have also been asked to stand at a specified distance in the queue for darshan and wear masks properly. He directed the concerned department to barricading the Darshan gallery. The spread of corona infection is apprehensive due to the excessive crowd and in such a situation it is necessary that the rules are strictly followed.

Teams have been set up to ensure compliance of Corona rules on the routes through which the deities are likely to come, which will also provide masks and sanitizers etc. to the deities and karcoons, if needed. He said that there can be no compromise on discipline. Ashutosh Garg said that health department counters would be set up at Dhalpur ground where vaccination facilities would be provided to the people. He has appealed to the people that those who have completed the period of 84 days after receiving the first dose, they should immediately get the second dose, only then you can enjoy the festival at Dhalpur Maidan. He also urged the people of Dev Samaj to get the second dose done if 84 days have been completed.

District Kardar Union will give the cooperation of the administration
Narayan Singh Chauhan, General Secretary of District Kardar Sangh and Kardar Gopal Mahant of Jawali Mahadev have urged the Devlus, priests and Karkoons to cooperate with the district administration in complying with the Kovid rules during Dussehra festival. With this, you will yourself be saved from the epidemic and Dev Samaj and common people will also be safe. It is requested that the deities who have been invited, they should sit in their pre-marked places and the deities who are not registered and are coming in Dussehra, they will bring their tarpaulin etc. and sit at a new site in Dhalpur ground. cannot be given. He should arrange his own seating area outside the Dhalpur ground as before. Urged that no deity should enter the office premises of the Deputy Commissioner. This will maintain harmony and discipline with the district administration.

Other deities should not accompany Lord Raghunath’s journey

Narayan Singh Chouhan has made another request to the deities that when Lord Raghunath ji leaves for Dhalpur Maidan from his residence in Sultanpur, then other deities should not visit Shri Raghunath ji’s temple during that time. Due to this, due to the narrowing of the road, there is a big problem of unnecessary congestion and traffic jam. If the deity goes to the temple of Shri Raghunath ji after Rath Yatra or before one o’clock in the afternoon, then it will not cause any inconvenience.

The deities arrived with Kullu Dussehra.