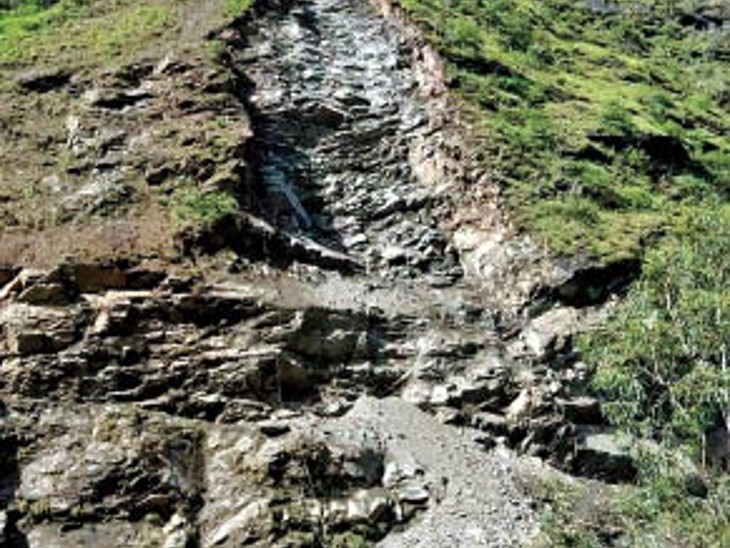 Traffic came to a standstill in Wazir Baori due to the cracking of the hill again.

National Highway 205 is used to reach Dharamshala from Shimla. In such a situation, the traffic load on this highway is very high. At the same time, the local people who come to Shimla daily also come through this highway. Due to the breakdown of the highway, now the most trouble is being faced by the local people, who have to reach by walking 15 kilometers.

Where earlier it used to take 15 minutes to reach Ghanahatti from Dhami, now it is taking 1 hour. DC Shimla Aditya Negi visited the landslide area in Ghandal on Tuesday and took stock of the situation. He directed the National Highways Authority to repair this road at the earliest.

Wazir Bawdi again cracks hill, traffic stalled
Rampur Bushahr| Traffic has come to a standstill due to heavy landslide from the hill on the Wazir Bawdi-Nirmand road connecting 32 panchayats of Nirmand section. The road restoration work could not start on Tuesday also due to landslide from the hill. In such a situation, thousands of villagers have to travel an additional 12 km via viaal. The process of landslides started from the hill on the road near Wazir Baori on Monday afternoon. LND SDO Uday Kaushal said that two machines had been deployed on Tuesday to restore the route, but due to frequent landslides, the work is being affected. Road restoration work will be started from Wednesday morning.