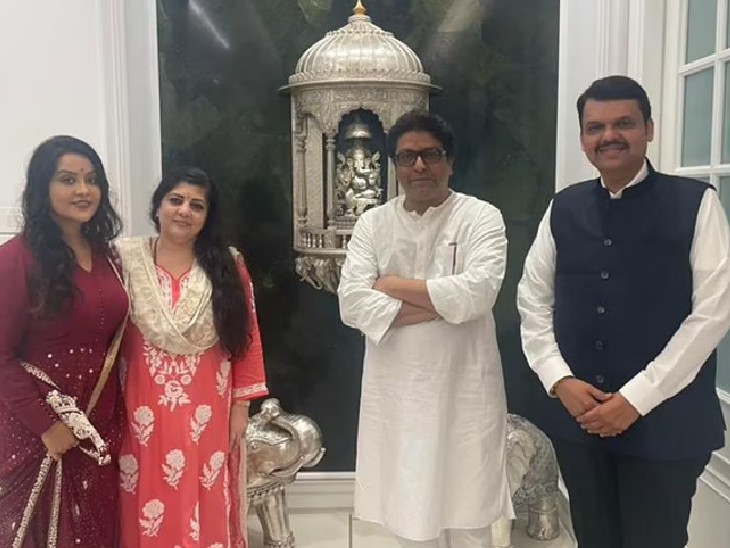 The former CM along with his wife Amrita Fadnavis had come to meet MNS chief Raj Thackeray.

On Wednesday, former Maharashtra CM and Leader of Opposition Devendra Fadnavis along with his wife Amrita Fadnavis reached Shivtirth, the new bungalow of Maharashtra Navnirman Sena chief Raj Thackeray. The meeting between the two families lasted for about two hours. Although the meeting looks personal, but the news of an alliance of BJP and MNS in the upcoming BMC elections and other elections has gained strength once again.

Discussion continues after meeting BJP state president
Earlier, after the meeting of BJP state president Chandrakant Dada Patil and Raj Thackeray, there was a lot of discussion about the MNS-BJP alliance. However, it was then said that the alliance talks have been postponed due to disagreements on some issues. Raj Thackeray shifted to his new home on the day of Diwali after defeating the Corona virus in early November. Raj Thackeray has built a new house near Krishnakunj.

The meeting between the two leaders went on for a long time. For this reason, the speculation market is hot.

Raj has also met some other BJP leaders
BJP MLA Ashish Shelar also met Raj Thackeray on Diwali. Earlier, Chandrakant Patil and Raj Thackeray met in Nashik. The MNS-BJP alliance has been in discussion for the last two-three months. Now that Fadnavis has reached Raj Thackeray’s house, it is natural for the discussion to intensify.

BJP looking for alliance option since 2019
In 2019, the 30-year-old alliance of Shiv Sena and BJP was broken. After leaving Shiv Sena, BJP is exploring the option of alliance with new allies. In such a situation, the meeting of Fadnavis and Raj Thackeray can again strengthen the wind of alliance. The first use of this alliance can be done in the Mumbai Municipal Corporation elections. BJP is a party that believes in the ideology of Hindutva. This is also the basic mantra of MNS. Nothing is impossible in politics, so the possibility of an alliance between the two parties cannot be ruled out in future.