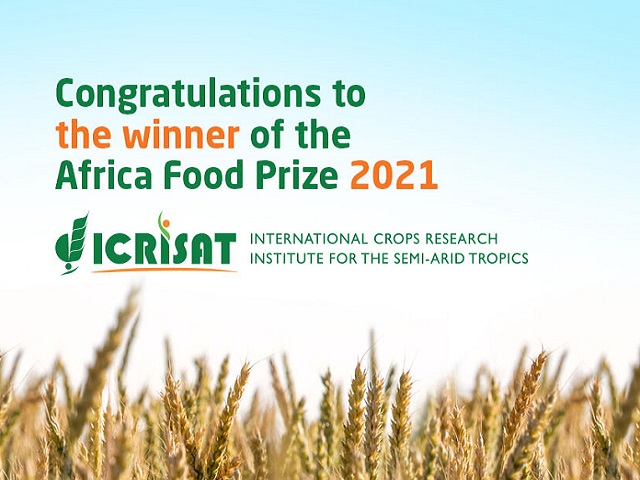 Africa Food Prize 2021 was awarded at the Africa Forum for Green Revolution (AGRF) 2021 Summit in Nairobi, Kenya on September 8, 2021. The International Crops Research Institute for the Semi-Arid Tropics won the award for its Tropical Legumes Project that was implemented to improve food security across 13 sub-Saharan African countries.

Chair of the Africa Food Prize committee Olusegun Obasanjo said while announcing the award, “ICRISAT’s leadership in developing seeds, that not only end malnutrition but also survive in semi-arid areas, is inspiring other agricultural organisations to rethink seed development and farming practices that suit and solve Africa’s agricultural challenges.”

The Africa Food Prize 2021 is a major recognition of ICRISAT’s work in Africa. ICRISAT Director General Jacqueline d’Arros Hughes said while accepting the award virtually that the recognition reinforces their belief that agriculture can be profitable for smallholder farmers. “We dedicate this award to the smallholder farmers in the drylands of Africa, as they are the ones who inspire us with their patience and perseverance in the face of adversity,” Hughes added.

The award carrying a cash prize worth USD 1,00,000 lays emphasis on the bold initiatives and technical innovations of the institute, which can be implemented across Africa to create a new era of food security and economic opportunity for all Africans.

ICRISAT, which has its headquarters at Patancheru on the outskirts of Hyderabad, India, led a collaboration of national and international institutions to implement the tropical legumes project between 2007 and 2019.

Under the project, 266 improved legume varieties and around half a million tonnes of seed for a range of legume crops including chickpea, cowpeas, pigeon peas, groundnut, common bean and soybean were developed.

The new legume varieties have helped over 25 million smallholder farmers to become more resilient to climate change and to pest and disease outbreaks.

Besides developing new legume varieties, ICRISAT has also trained around 52 next-generation scientists in countries where the projects were implemented and this has helped strengthen the research capacity of agricultural systems in Africa.

•The Tropical Legumes Project has helped millions of smallholder farmers relying on dryland ecosystems to grow more food and become more resilient in the face of climate change.

•The groundnut crop interventions demonstrated a 32.35 percent increase in income, resulting in the lifting of 6.72 percent of households out of poverty and 14 percent out of food insecurity.

•Under the project, ten groundnut varieties, including six high-yielding, drought-tolerant ones and four ELS (Early Leaf Spot) resistant, were released in Mali.

•Besides this, seven groundnut varieties with aflatoxin tolerance, early maturing and drought tolerance were also released.

•In India as well, there was an area enhancement of up to 68 percent in the national programme on developing improved varieties of chickpea as a part of the Tropical Legumes Project.

•The project’s chickpea program in Ethiopia had won a national award in 2013 for science and innovation. It also led to a seven-fold increase in the number of improved common bean variety releases from 2011 to 2018.

As per ICRISAT, dryland ecosystems cover around 45 percent of Africa’s landmass and its supports almost half a billion people. However, these ecosystems are fragile and very prone to the effects of climate change and environmental degradation.